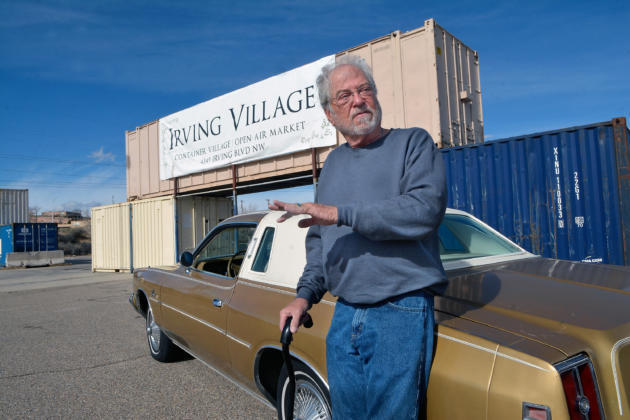 ALBUQUERQUE, N.M. — A row of stacked containers outline what will soon be a 4½-acre vending space called Irving Village on the West Side site where the old Rowland Nurseries used to be.

It’s the brainchild of radio personality, photo enthusiast and car buff Alan Pettit, who is leasing the property from the Rowland family.

“The idea here is to have what we call a container village that will be split into different sections that will be set up for various items,” Pettit said.

Irving Village will be an open-air market, and the containers will be used by vendors for storage.

Pettit has been putting bits and pieces of his open space market together since late November, and has moved in eight 53-foot containers to outline some of the market’s different sections.

He said he has eight vendors already using the space on weekends but will have room for 200. The next step will be putting in light poles and a new reseal on the existing parking lot.

“My intention is to paint the containers and use them for storage so vendors don’t have to load up their goods every time they leave,” he said. “This is not going to be like Green Jeans, this is going to be something completely different. We aren’t taking shipping containers and building them out as retail spaces. Instead we are using our containers for storage.”

Green Jeans Farmery on 3600 Cutler Avenue is a collection of shipping containers turned into eateries and a brewery in the shape of an old Spanish plaza.

The cost for vendors at Irving Village is $25 a day for a 10-by-10 space, but Pettit said he would work out a deal with vendors who want the space for a longer period.